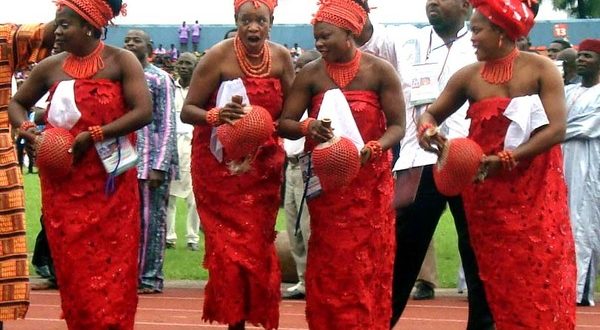 Ohogho is a dance in a revolving circle. It is a religious dance. Its troupe belongs to certain physicians-ebo group of Benin culture. The groups are usually strong and healthy senior Eroghae and Ighele age groups.

The dancers wear waist gown-ebuluku and dance in circles with gongs or bells in their hands, and around a bowl alight with burning medicinal leaves and splinters of wood.

It is a protective dance to ward off evils as the smoke dispersed into the atmosphere, so also epidemics, wars and calamities disappeared, hence in a song “Agha yo Okuo a mai khon, Iyeke a ya rrie”. If one went to war and did not fight, the person retracks backwards.

Ohogho dance is considered as an art that forms a part of religious ceremonies. It is danced in a revolving circle and the dancers play clapperless bells — egogo or gongs with gong sticks.

Clapperless bell egogo is one of the most common musical instruments of Edo people. It is made of two pieces of iron welded together into a conical shape. It is oval in cross-section and the size may vary, in length including the handle. This type of bell is called egogo among the Benin and Esan, Ulo or agogo among the Etsako, Ivbiosakon, Urhobo and Isoko.

Single clapperless iron bells are used in many types of music to produce a basic accompanying rhythm or a melody, but in Ohogho dance egogo produce the main melody for the songs.

The egogo is also described by early European visitors to Great Benin. This means that bells of this type have been in use for at least three centuries, thus a Dutchman who visited Benin about 1600 tells that the Benin have a hollow iron whereon they strike and about a hundred years later another visitor mentioned that the inhabitants of Benin “have a sort of Iron bells on which they play”.

Sometimes egogo-erhan accompanied the clapper-bells; to give variation to the sounds.
Ohogho dance is always performed during Eho festivals and sometimes during funeral ceremonies. Any person dancing ohogho cannot fall doing it. – Neo gbe ohogho I de vbe uke.

Ohogho is a traditional folk dancing and have grown up over many hundreds of years. This tradition is still surviving till nowadays.

In the olden days folk dancing was very popular and people regarded it as something that every person should be able to do, and they were performed with great enthusiasm.

Ohogho music is usually very rhythmic as the dancer move swiftly in circles. Only men perform the dance and are so exciting and entertaining to watch.

Ohogho dance is performed mainly during Eho festival and certain ceremonies. These cycles of rites such as feasts and ceremonies celebrate in effect the passages of all nature; from one stage to another — age, religious, or seasons, because passage rites celebrate religious aspects of human existence.

Passage rite has the function of sanctifying and protecting those moving from profane to sacred as it is considered more of mysteries.

This rite often pay no attention to the idea of homage or invocation to a divinity. This show that worship of divinity is not the focus of Ohogho dancers.

This rite of passage deeply express strong submission to a superior cosmic order which is to subject all human and natural growth to a process of complete renewal of being.

The total acceptance of human way of being demonstrates subjectively all the uniqueness of the religious outlook. However, these rites are devoid of the worship of divinity, since the sovereign will and intermediation of divinity are not evoked. The ‘gods’ if mentioned at all model who were the first themselves to experience the cosmic law of renewal.

This brings to assert that Ohogho dance can profit deeply only where the mystical rites are the vital part of worship. The religious dance for questioning, discussing and analyzing should encourage the spiritual content of religion.

Ohogho myth may suggests the rites though it cannot be said that myth explains rites all the time or that every myth suggests rites, it is proper to state that myth is rite. In that instance, it is good to state further that even the recitation of the myth song is also a rite.

This is demonstrated by its communication. The myth seeks to express religious experience in tandem with the real elements of the experience. Viz “U ghere kiekie, obodo “ it is only the myth that undertakes the projection of this experience ahead of concrete and profane time, so as to stress its value to the rites.

Ohogho dance in participation is a cultural get-together whose exclusive team spirit includes the life of individuals concerned.

Ohogho dance has not been devastated by the getting in touch with other cultures and blending with them. It is still a natural folk dance of ancient Benin Culture.

In its broadest sense ohogho religious dance includes all forms of belief in the existence of superior beings exercising power over human beings with future rewards and punishments.

The ancestral premier beliefs and rites of such religious dance might be the fact that studies demonstrate their religious feelings and activities have very deep practical purposes for them, and helped the people to cope with their various problems of life. It helped them to assuage various calamitous moments of human destiny.

In this way ohogho religious dance assisted the forebears to eliminate despair and created confidence and hope that enable them to conduct their daily affairs with a renew sense of value in life and in all activities that promote life in a culture.